After moving down to London in the late 60s, he befriended Phil Collins and helped form Phil's inaugural band, Flaming Youth; the two musicians later collaborated on three projects. His career as a sideman flourished, affording him the opportunity to play alongside the greats such as Joe Cocker, The Hollies, Meat Loaf, Justin Timberlake, with B.B. King on the Tonight Show and countless other renowned performers.

Highlights in the book include the story behind the worldwide hit entitled “I Wanna Be a Cowboy” by his band Boys Don’t Cry, his encounters with Paul McCartney, Ringo Starr, Ronnie Wood and Jimi Hendrix, as well as writing, working and living with Keith Emerson for 14 years.

Chatton's personal philosophy that there’s a laugh to be found in almost any situation is a theme which runs throughout the book, which features close to 200 photos of his friends, family and bandmates, as well as an array of custom illustrations. 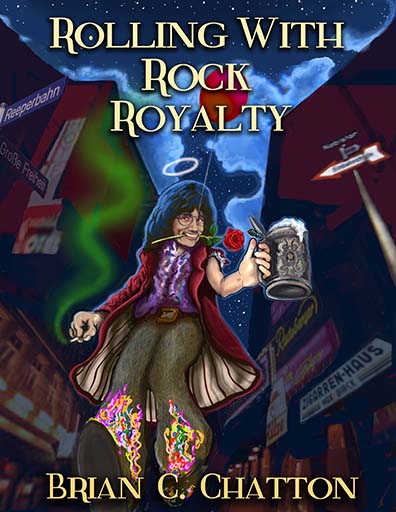 I bought this highly entertaining book at a book signing event at Book Soup on Sunset Strip in Los Angeles. Cheeky Brian was there and kept us all laughing as he read passages of some of his amazing experiences with Rock Royalty figures such as Jimi Hendrix, Ringo Starr, B B King and Paul McCartney and so many more. Whether you are personally familiar with Brian Chatton or not you should get the book because you will feel as though you're living through that whole amazing period yet again. Hey, and it'll look good on your coffee table too. Cheers!
Vivienne Infante

The truth is, Brian Chatton reveres every single person who has fortunately been immortalized in his ROLLICKING Memoir, "Rolling with Rock Royalty"!!! Brian in his SO funny, SO self deprecating, SO honest in this book. Never at a loss for words, I love how he admires, reminisces and adores, all while regaling us in his unique and wickedly delightful tone!!! Whenever possible, Brian takes his enormously bright light and generously shines it on others in his book!!! His talent, accomplishments and adventures are legend... Brian Chatton IS Rock Royalty!!! All Hail His Royal Highness!!!

Go to Facebook to order this book! It's AMAZING... SOOO many cool pictures and stories!!! Just like the page Rolling with Rock Royalty!!! You can send the fab Brian Chatton a message! He'll even sign a copy for you! He's an awesome guy! I HIGHLY RECOMMEND THIS READ!!! ♥️

A very entertaining look at music from the 60s to the present!

Brian Chatton is a very entertaining & funny keyboardist, with a long CV back to the early 60s in England and then America. He tells many inside, never before told stories about working with singer Jon Anderson in the Warriors, his long friendship with Yes and Phil Collins, his work with Meat Loaf, B.B. King, and many others. I have never laughed so much before while reading a music autobiography! A must for fans of Yes, British rock in the 60s & 70s, and anyone who wants to real story of a life as a rock musician over the last 50+ years.

Rolling with Rock Royalty  isn’t your ordinary autobiography about the music business.

Since the ‘60s, singer-keyboardist Brian Chatton has lived and breathed the rocker’s life, and in his colorful memoir he details many of his ups and downs, his many escapades and encounters. Just a few of the notables with whom he’s worked or crossed paths: Jimi Hendrix, John Mayall, Phil Collins, John Miles, Yes, Meat Loaf. Especially vivid are Chatton’s recollections of traveling the
globe as a touring mu- sician. What comes through wonderfully is Chatton’s English charm, his glib and winning spirit, some- thing that must’ve helped him survive the often rough and tumble rock life. Like the man’s life, this book is all over the place––and fun.

Knowing the author of any book, certainly changes the way you view it.

Rolling with Rock Royalty, by Brian Chatton, is no exception. I loved it! I read it from cover to cover and couldn’t put it down until the very end!

The well-known L.A.-based British keyboard player has delivered a humorous and witty debut that covers his fifty-plus years in the music industry, which saw him rubbing shoulders with some of the biggest names in pop and rock music.

Beginning with his first live performance at the world-famous Cavern Club in Liverpool, in 1965, Chatton’s memoir takes us on a journey from his humble beginnings in Northern England’s Lancashire to life on the road, and the glitz and glam he experienced while living the rock-and-roll dream.

Veteran keyboardist and performer Brian C. Chatton—whose 50 plus year career encompasses all incarnations of the so-called "British Invasion" which helped to shape modern popular music—has led a storied life, far different from that of his humble beginnings in Northern England’s Lancashire province.

Chatton is a gifted showman who has garnered the respect of the many music industry giants he has worked with over the years from the time of his first professional gig at the original Cavern Club in 1965, including Jimi Hendrix, Alan Parsons, The Hollies, John Miles, Jon Anderson, Phil Collins, Meat Loaf, BB King, Keith Emerson, Eric Burdon, Joe Cocker etc. He has been involved in just about all aspects of the business, from producer to session player, to seasoned lyricist and consultant. His Gold Record winning record, “I Wanna Be a Cowboy”—a

Veteran keyboardist and performer, Brian C. Chatton — whose 50 PLUS YEAR CAREER, encompasses all incarnations of the so-called ” British Invasion ” which helped to shape MODERN POPULAR MUSIC — has led a storied life, far different from that of his humble beginnings, in Northern England’s Lancashire province.

He is ENGAGING, WITTY, an EXCELLENT STORYTELLER, and VERY HUMBLE for someone of his caliber and level of expertise – a quality that has served him well with colleagues, friends and admirers throughout the years. This engaging memoir is the result of being encouraged for many years to finally commit to paper the story of his amazing journey, which is replete with many of the unique “ Brianisms ” which he has come to be associated with over the years, as well as a healthy dose of characteristic British self-deprecation and understatement.

Brian Chatton: Once A Warrior.Rolling With Rock Royalty. An Autobiograpy

Brian Chatton was the keyboard player with Lancashire band The Warriors. While the Warriors were not the biggest band to come out of Lancashire – that accolade belongs to a certain Liverpool band – the Warriors built up quite a following at the Cavern in Liverpool. Major success eluded them, but some of the members did incredibly well post their time in the band. Jon Anderson, of course, co-founded the massively successful band Yes. Bassist David Foster co-wrote two songs with Jon Anderson, “Time And A Word” and “Sweet Dreams” for the second Yes album entitled Time and A Word, and formed the band Badger. Drummer Ian Wallace went on to work with a diverse collection of bands and artists including Vivian Stanshall, King Crimson, Tim Buckley, Bob Dylan, Bonnie Raitt, and Don Henley.